Since only in exceptional cases with a rook’s pawn a forced mate can be constructed, in endings of king and one knight against king and one pawn, the goal is to find a draw i.e. to stop by the sole knight or in conjunction with the king one or more pawns on their way to promotion. In view of the specific strategy in some cases, we may divide these endings into three thematic wholes, whereas the problems involving endings of king and two knights versus king and one pawn will be separately dealt with. The latter ending fully demonstrates the manoeuvring possibilities of the knights as well as their complex co-operation with the king in gradually gaining space. In this chapter we shall examine these themes:
Knight versus One Pawn
Knight versus Two Pawns
Knight versus Three Pawns
Two Knights versus One Pawn

As a rule, the knight easily draws versus one pawn even without the king’s assistance provided it can gain control of the promotion square. A relatively unfavourable case with a pawn near the rim of the chess-board is shown in the following diagram. Although the pawn has already reached the seventh rank, the knight easily keeps it in check since can retreat to either side of the pawn. After 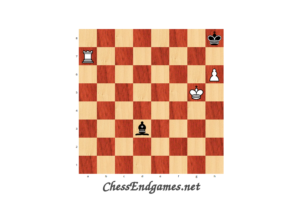