Of special significance for the theory of endgame as well as indispensable for acquiring a high-level technique in converting minimal advantages, are endings of two knights against one pawn. In the introductory chapter on elementary endings with minimum mating material, we have seen that two knights cannot force a win since Black defends by stalemate. However, if the weaker side has a pawn, a win is possible provided one knight in time blocks the pawn sufficiently far from the square of promotion. In conjunction with the other knight the king will, by means of precise and subtle manoeuvres, drive the enemy king into a corner and then aided by the blocking knight execute the mating attack. The pawn is fatal for the weaker side since it precludes defence by stalemate. The driving of the enemy king into the corner by means of only one knight is a time-consuming and strenuous process; it sometimes requires more than fifty moves. That is why we will first examine a relatively simple case which arose in the game Choguric – Susic ( Porec, 1974 ) . Black to move wins relatively quickly since he has blocked in time the pawn by one knight, while his king and the other knight greatly restrain the mobility of the opponent’s king. Black’s goal is to box-in the enemy king in the corner a1 or h1, unblock the a-pawn and finally by the other knight swiftly execute the mating attack. 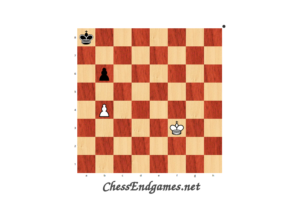