In static positions where the weaker side defends by the opposition or correspondence, the reserve tempi play a crucial role. In order for them to be sufficient for a win mainly depends on whether the opponent can create adequate counter-play. This is nicely illustrated in a flawed study by G. Neustadtle, refuted recently by grandmaster P. Nikolic. Although the author had originally thought that White wins by gradually occupying the d4-square and saving the reserve tempi by the h-pawn, White to move cannot win. In order to comprehend the complex strategy of gaining space, it is vital to know that the pairs of squares e3-d5, e4-c5, f3-c6 and d4-b5 are in correspondence, i.e., in all these situations Black to move cannot avoid using the h-pawn reserve tempi. However, despite the black h-pawn becoming the target of White’s attack, Black will manage to penetrate on the queenside and obtain sufficient counter-play by deflecting White’s king to the h-file. 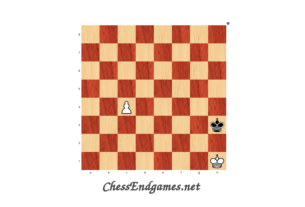