2.4. King and Two Pawns versus King and One Pawn

In endings with minimal material, one-pawn superiority is generally converted into victory – especially if the stronger side has a passed pawn. However, the term “generally” should be taken with great caution. The fundamental laws governing the game of chess are usually explained by rules and principles of all sorts; nevertheless, none of these are universal. Even the slightest change of the pawn structure may call into question their validity. That is the reason why every position must be examined and re-examined critically and open-mindedly – despite well-known patterns or our prejudices. The need to cultivate the critical attitude is aptly illustrated by the introductory example to this chapter. Occasionally even two passed pawns enjoying a solid king support cannot guarantee a win. This very instructive endgame arose in the game D. Horvath – Cs. Horvath, Hungary, 1988.

In endings of king and two pawns versus king and one pawn, some general principles may be formulated! A distant or protected passed pawn generally represents a decisive advantage. In all other cases the crucial factors may be king activity, full or distant opposition, reserve “tempi”. In blockaded positions with mutual zugzwang, that is, positions where the outcome hinges on who is to move the stronger side very often has at its disposal a very efficient strategical weapon - the so-called “triangulation” (moving the king along a triangle). By means of triangulation the rival is forced into losing the opposition. As a consequence, one of the critical squares will be secured guaranteeing a win. With regard to strategy employed in different positions, we may divide these endings into four basic groups:
1. Isolated pawns with one passed pawn
2. Isolated pawns - none of which passed
3. Connected pawns with one passed pawn
4. Connected pawns - none of which passed 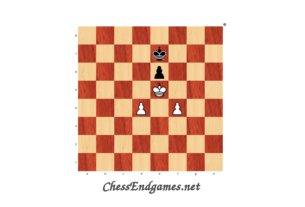