Even though, statistically speaking, rook is materially much more valuable than two pawns and most often than not, manages to prove its tactical merit and power, in these endgames the weaker side has quite good prospects to get saved. Position of pieces greatly effects the outcome of the game. Pawns are as strong as they are close to each other and far advanced pawns with king’s support can even win. If stronger side has active pieces and is able to stop the pawns in time, that is usually enough to win. These endings contain essentially different strategic and tactical motifs and thus we will divide them into three basic groups: with connected pawns, with isolated pawns and with doubled pawns.

a ) Endings with connected pawns

In introductory example 4., we have already seen that far advanced passed pawns can be stronger than rook. When both kings are distant, pawns alone will win if both of them are on the sixth rank, otherwise they lose. In all other situations, positions of kings in relation to pawns, and the rook activity, will decide the game. As usual, this just defined rule is not absolute! Here too, there are exceptions, one of which was presented by I. Moravec in his study published in 1924. Although both of his connected pawns are on the seventh rank, and only a step away from queening, Black cannot win due to a bad king’s position. White to move draws allowing the opponent not even the shortest break with constant checking, i.e. mating threats. 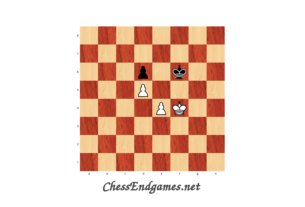 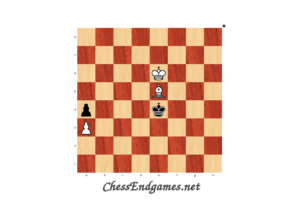